To share your memory on the wall of James Brickey, sign in using one of the following options:

Print
On Sunday, September 6, 2020, James Nolan Brickey died peacefully in his home, surrounded by his family, due to cancer.

He was born on Friday, January 21, 1938 in Roanoke, Va. In 1958, Nolan joined the United States Armed Forces. Short... Read More
On Sunday, September 6, 2020, James Nolan Brickey died peacefully in his home, surrounded by his family, due to cancer.

He was born on Friday, January 21, 1938 in Roanoke, Va. In 1958, Nolan joined the United States Armed Forces. Shortly after joining, he was deployed during the Korean War. While there, he specialized in heavy artillery.

After returning home to the states he became a sheet metal worker specializing in roofing. He enjoyed working at the Salem VA Medical Center in Salem, Va. and later retired from there.

Nolan always put the family’s need before his own. He and Wanda spent a lot of their time caring for their grandchildren and this left a lasting impact on their lives. The most important thing that Papa would have wanted to share about his journey was how he gave his life to Jesus. He truly was a changed man.

He showed the love of Christ with everything he did. The last hat he proudly wore said “I love Jesus” on it. He loved his family so much, but Wanda was truly his pride and joy.

James Nolan Brickey, also known as “Papa,” will be greatly missed by all who knew and loved him. We are thankful for the time we had with him here on Earth, and we look forward to seeing him again.

Nolan was preceded in death by his mother, Annie Roop; and his father, Richard Brickey.

Please join us to celebrate his life at 11 a.m. on Monday, September 14, 2020, at the Southwest Virginia Veterans Cemetery located at 5550 Bagging Plant Road in Dublin, Va. 24084. Pastor John Ferguson will officiate and the US Army will render military funeral honors. 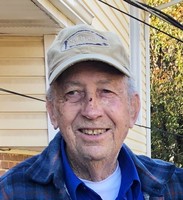