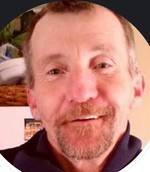 A service to honor Tim's life will be announced at a later date.

Online condolences may be expressed by visiting www.johnmoakey.com.