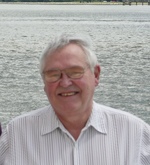 Bob was born on November 16, 1948, in Evansville, IN, to the late Luther Patrick and Erdean Whitaker Barnett. Some of Bob’s fondest childhood memories and most colorful stories reside on the then family farm back in Bowling Green, KY. Following high school, he furthered his education at St. Andrews University—then just a college—of Laurinburg, NC, where he earned his bachelor’s degree in Psychology, and earned a spot on the college’s soccer team as a halfback.

His degree and affinity for mentoring young men led him to become a counselor, alongside his first Doberman companion, “Freya” at a local boy’s home. Freya became the matriarch to a proud line of Dobermans that Bob raised in the forthcoming years. Bob’s passion for mentoring eventually evolved into a brief career as a parole officer for the city of Roanoke, VA.

After some time, Bob decided to change it up a bit, and after passing the physical (including the back x-ray), became employed with Norfolk Southern Railroad—then Norfolk & Western—as a brakeman and was later promoted to conductor. After an unfortunate derailment accident in Bluefield, WV, during the blizzard of 1993, he was forced to retire from the railroad after 14 years of service, but his work ethic never ceased.

Bob’s masterful woodworking talents were lauded by anyone who knew him. His sharp eye, sedulous commitment to detail, and quality were evident in everything he crafted. His large scale creations include his cabin where he lived for nearly five decades, the wagon wheel at Jersey Lily’s Restaurant, the “spokes” on Jackson’s Four Gospels at VMI, and, of course, the famous Civil War cannon he built from the ground up that will continue to tell stories for years to come. On a smaller, more sentimental scale, his two children have their own respective miniature cannons they built with him as small children.

Bob was known as “Bobcat” to his friends of the 2nd Virginia Cavalry, with whom he thoroughly enjoyed recreating various battles of the historical Civil War.

Above all, he will be remembered as a stern, but loving father, faithful husband, and friend to anyone who knew him. Bob will be dearly missed!

In addition to his parents, Bob was preceded in death by numerous loving aunts, uncles, and k-9 companions.

Per the wishes of the family, a celebration of Bob’s life will be conducted at a later date, once we are able to truly celebrate his life together.

Expressions of sympathy may be expressed by visiting www.johnmoakey.com.