To share your memory on the wall of Randall Agee, sign in using one of the following options:

Receive notifications about information and event scheduling for Randall

We encourage you to share your most beloved memories of Randall here, so that the family and other loved ones can always see it. You can upload cherished photographs, or share your favorite stories, and can even comment on those shared by others.

Posted Aug 26, 2020 at 08:05am
"Uncle Joe" was a fine man who taught me a lot. He was always kind and engaging. He will be missed. He has now heard the most important words any of us can hope to hear: "Well done, good and faithful servant. Enter now into the joy of thy Lord."
Comment Share
Share via:
GH

Posted Aug 24, 2020 at 05:00pm
I served with Randy on Charlie Flight at San Vito Air Station around 1969-71. At the time you would not thought we would ever amount to much being just out of our teens, single, and away from home and "off the leash". Randy was a good fellow and a good analyst and I am blessed to have been part of a great team back in the day. I am so impressed by what he did with his life after that first enlistment. My condolences to his family and friends. May they know that his old comrades remember him and will be shedding a tear.
Comment Share
Share via: 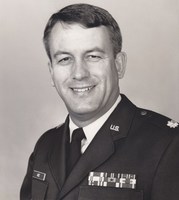