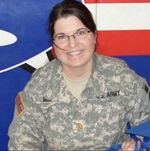 It is difficult to find the words that would truly describe a person like Megan. In such a short amount of time on this earth, she excelled and achieved things that others can only dream of. In her early years she received her bachelor’s degree in biology and Music at the College of William and Mary. She then went on to achieve another Doctorates Degree from Eastern Virginia Medical School as an O.B.G.Y.N., from there She joined the United States Army in 1999, from which she retired as a Major after thirteen dedicated years of service to her country and was given the honor of a Superior Honorable Discharge. A well-decorated officer, during her time in the service she received four Cares Awards for excellence during surgery, an Army Achievement Medal, National Defense Service Medal, as well as numerous others that are far too many to list. After retiring from the military, she went on to serve a residency at the University of Virginia for Psychiatric Medicine. Up until her passing, she was serving as a Forensic Psychiatrist for Catawba State Hospital. There are so many accomplishments that could be listed, however, she leaves behind a great and achievable legacy for all her children, as well as anyone willing to set goals for themselves and pursue them tirelessly. If she could leave behind any words to remember her by, they would be to never give up, always follow your dreams, and never doubt or underestimate yourself, nor your potential.

Megan is preceded in death by her grandparents, Donald and Dorothy Dow, as well as Lawrence and Dorothy McPhee.

Left to cherish her memory and carry forth her legacy are her parents, Lawrence and Doreen McPhee; loving wife of eight years, Amanda McPhee; children, Jonathan Arnold, Cameron, and Conner McPhee, and last but not least, Hannah Arnold; mother and father-in-law, Gary and Patty Richardson; brother-in-law, Gary Richardson, and husband Barry; also left to cherish her memory are her ever so precious fur babies, Juno, Lily, Alfie, Sooki, Finch, and Sophie.

The family would like to extend their sincerest appreciation to the Roanoke City Police Department, as well as Roanoke City Fire & Rescue for their compassion and tireless efforts.

Charitable donations can be made directly to the family during the visitation in her memory to help the family financially carry forward during this difficult time.

Accessing the live stream broadcast of Megan’s service can be done by clicking on the BLUE LINK below on Friday. The broadcast will begin at 5:50 p.m.