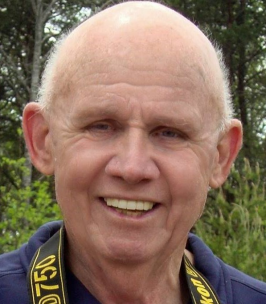 Kenneth James Webber, 84, of Moneta, VA passed away on Monday, June 27, 2022, surrounded by his wife and children. Born in Everett, MA, he was the son of the late Kenneth M & Anne C. (Greek) Webber.
Ken graduated from Everett High School in 1956. After high school, he enlisted in the Navy and served as a submariner on the USS Albacore. He began his career in the telecommunications industry for New England Telephone and Telegraph in 1959 and eventually transferred to AT&T where he held several IT positions. After 30+ years, he retired from AT&T and moved to Smith Mountain Lake. He chose to spend his retirement sharing his many talents in service to the community. He volunteered for various Christian organizations. His passion for serving others took him on several mission trips around the US and Africa, including building homes for survivors of Hurricane Katrina in Mississippi and to orphanages in Uganda. He began attending East Lake Community Church in 2007 where he served in a number of capacities but was best known for his photography ministry.
Ken is survived by his wife Jean; son Scott & his wife Dianne of Moneta; daughter Susan & her husband Chris McFarlane of Alexandria, and his son, Craig & his wife Lisa of Jesup, Georgia. He was the loving grandfather to Aaron Webber, Stephen Webber, Corey Webber, Jason Webber, Ti Torres, John McFarlane and David McFarlane and 8 great grandchildren. Also surviving is his sister, Kathie Anne Reich and husband Larry Ross Reich of Palm Coast, Florida.
A visitation will be held at East Lake Community Church 1201 Timberwood Lane, Moneta, VA, on Friday, July 8th from 6 to 8 PM. A celebration of his life will be held at East Lake Community Church on Saturday, July 9th at 11 AM. In lieu of flowers, contributions can be made to the Webber scholarship fund at Smith Mountain Lake Christian Academy (checks can be made payable to SMLCA with Webber scholarship fund on the memo line and sent to SMLCA, c/o Lincoln Bryan, 1449 Hendricks Store Road Moneta, VA 24121).