To share your memory on the wall of Kenneth Bowles, sign in using one of the following options:

Print
Kenneth Ray Bowles, 86, of Salem, went to meet his Lord and reunite with Norma, his loving wife of 63 years on Saturday, December 21, 2019.

He was born in Salem, a son of the late Emmett and Gertrude Wilson Bowles and had been an area re... Read More
Kenneth Ray Bowles, 86, of Salem, went to meet his Lord and reunite with Norma, his loving wife of 63 years on Saturday, December 21, 2019.

He was born in Salem, a son of the late Emmett and Gertrude Wilson Bowles and had been an area resident all of his life. He proudly served his country in the U.S. Air Force during the Korean War, and retired as an inspector from General Electric following many years of service. He enjoyed reading his Bible, and listening to music, but mostly spent his time caring for his beloved wife and spending time with his family. In addition to his parents and wife, he is preceded in death by a brother, Donald Lee Bowles.

Funeral Services will be held at 2PM, Thursday, December 26, 2019 at Central United Methodist Church. Pastor Bryan Buckles will officiate. Burial with military honors will follow at Sherwood Memorial Park. The family will receive friends for two hours prior to the service, beginning at 12PM, at the Church. In lieu of flowers, memorial contributions may be made to Central UMC 428 College Ave. Salem, VA 24153 or to the American Cancer Society 2840 Electric Rd. Suite 106A Roanoke, VA 24018. An online guest book is available for family and friends by visiting www.johnmoakey.com.
Read Less

We encourage you to share your most beloved memories of Kenneth here, so that the family and other loved ones can always see it. You can upload cherished photographs, or share your favorite stories, and can even comment on those shared by others.

Guaranteed hand delivery by a local florist
BE 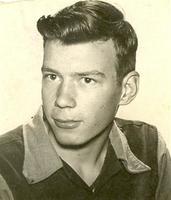