To share your memory on the wall of James Young, sign in using one of the following options:

He loved spending time with his family. Cross-country motorhome trips and 50 years of gatherings at Smith Mountain Lake kept the family entertained and close-knit. Barbara and Jim enjoyed traveling the world together and playing tennis and bridge with lifelong friends from high school.

He was a 1949 graduate of Andrew Lewis High School, where he lettered in football and baseball. He earned undergraduate and law degrees from the University of Virginia, where he played on the varsity football team for three years and was a member of the Raven Society, IMP Society, and SAE fraternity.

In the Korean War, Jim served his country in the U.S. Army as company commander of a transportation unit. He continued in the Army Reserves for 22 years, retiring as lieutenant colonel.

Jim was a partner in the law firm of Dodson Pence Viar Young & Woodrum in Roanoke until 1994, when he returned to Salem for private practice. He continued to help his valued clients into his 80s.

He served the Boy Scouts of America in many capacities over a 50-year span. Jim was president of the Blue Ridge Mountains Council, served as the council’s attorney for many years, and chaired the Service Center Building Committee. He was so proud that two of his grandsons earned the Eagle Scout rank.

A member of Salem Presbyterian Church for more than 70 years, he served as deacon, elder, trustee and Sunday School teacher.

Jim received many accolades, including The Jaycees Distinguished Service Award, Silver Beaver Award of the Boy Scouts of America, and Economic Development Partnership Citizen of the Year. He was inducted into the Salem High Alumni Hall of Fame and was a lifetime member of the VA PTA. An accomplished tennis player, he was a three-year Virginia USTA doubles champion in the 75-80-year-old division and a two-year champion in the 80-plus age group.

A graveside service with Military Honors will be held at 11 a.m. Tuesday, June 16, 2020 at Sherwood Memorial Park, 1250 E. Main Street, Salem, with the Rev. Janet Chisom of Salem Presbyterian Church officiating. An online guestbook is available for family and friends by visiting www.johnmoakey.com.

Jim will be missed greatly and remembered for his generosity and servant's heart.
Read Less

Posted Jun 18, 2020 at 12:09pm
Dearest Barbara and Family
We are so sad to loose such a great man and friend and Fan! But are joyous as he now enjoys all the rewards
of a life well lived in eternity with his Lord and Savior. You are in our prayers in the days ahead as you
miss him and continue his legacy. We will always remember our tailgates! We love you. Ropie & Pam Bayse
Comment Share
Share via:
C

Posted Jun 16, 2020 at 01:07pm
Another long time friend and fellow lawyer gone. A really good guy who will be missed by all who knew him.
Comment Share
Share via:
HW

Posted Jun 16, 2020 at 08:39am
I'm sorry to learn of Jim's passing. He was one of the first to welcome me to town when I moved to Salem in 1974 & I was invited to join a group of local UVA alums who regularly traveled together for basketball games in Charlottesville. Jim was always a gracious, thoughtful and generous person. He will be missed.
Comment Share
Share via:
BH

Posted Jun 15, 2020 at 02:23pm
Barbara it's been so much fun getting to know you in pickleball the last couple of months. I am so sorry for you loss. Jim sounded like a fantastic man, just like his wife is. You were a devoted, caring and loving wife. Please don't hesitate to ask any of your pickleball buddies for help in anything you need! We are all sharing in you loss!
Your friend, and pickleball partner who gets the balls when you say yours!
Betsy 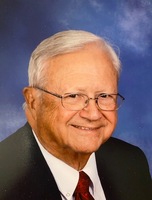 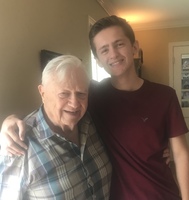 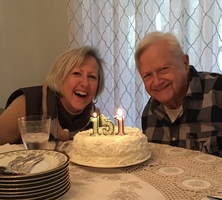 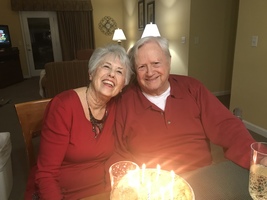