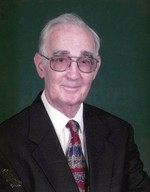 He was born on May 11, 1927 in Roanoke, Va. to the late James M. and Ethelene Bowers Richards.
James, as many others in his generation, enlisted and faithfully served his country in the United States Army Air Corps Reserves at the age of only fifteen. He was honorably discharged several years later with the rank of corporal with his pilot’s license in his pocket. Following his service, he became employed with G.E. where he spent another 30 years of his life as a dedicated employee. He was also employed with Sears with 12 years of service and carried the mail on weekends in rural areas. He certainly could not be remembered as lazy man! James was also a faithful member of Bonsack Baptist church, but above all, he will be remembered as a loving husband, father, grandfather, and friend to all that knew him. James was a loving, caring, and gentle man who brought smiles and joys around him. He will be missed!

In addition to his parents, James was preceded in death by wives, Frances Richards and his late wife, Martha Richards; his son, James (Jimmy) Richards, Jr.; and his sister, Maxine Richards.

Family remaining to cherish his memory includes his daughters, Donna Roye and husband, Dwayne, and Judy Amos and husband Byron; grandchildren, Russ, Heather, Robin, and Duane; and five great-grandchildren.
The family would like to offer a special thanks to James loving caregivers; Stephanie, Nikki, Dawn, Valerie, and Mariann.
The family will receive friends on Wednesday, December 4, 2019 from 5 until 7 p.m. at John M. Oakey & Son Funeral Home in Salem.

Funeral services to honor James life will be conducted on Thursday, December 5, 2019 at 2 p.m. in the funeral home chapel. Entombment will follow at Sherwood Memorial Park in Salem where military rights will be rendered.

Online condolences may be expressed by visiting www.johnmoakey.com.