To share your memory on the wall of Gladys Tayloe, sign in using one of the following options:

Provide comfort for the family of Gladys Tayloe with a meaningful gesture of sympathy.

Gladys attended school at James Buchanan School until she was in the high sixth grade, and her parents moved to Roanoke, and then attended Belmont school for half a year. She moved on to Jackson Junior High School and graduated from Jefferson High School in 1934. After graduation. Ms. Tayloe became deathly ill with Scarlet Fever and diphtheria and was unable to attend college.

Following her recovery, she became employed with S.H. Kress Company in Roanoke, where she met her future husband, Eugene G. “Gene” Tayloe. He was currently employed with N&W Railroad. After a brief courtship, they eloped to Martinsville and were married on December 30, 1938.

World War II would prompt Gene to enlist in the U.S. Army, and he was deployed to Korea at the break of the Korean war serving in the transportation corps. During his deployment, Gladys became employed with Thaden Engineering Company before her employment with G.E., where she would retire in 1979, after 23 years of faithful service.

Gladys was a long-time volunteer at the Salem VA Medical Center, serving over 27,000 hours of service dating back to 1963. She served in numerous roles, serving in the cancer center, the laboratory for Phlebotomists, as a clerical pathology secretary, as well as many, many parties, dinners, Chaplain’s service’s and Bingo games, held for the patients. Gene was among the patients she served until his death, but she remained to help others. She had been the VAVS (Veteran Affairs, Veteran Service) representative at the hospital for many years, as well as serving as their treasurer.

Gladys was a member of many veterans’ organizations, including DAVA 3, serving as Commander twice and as Adjunct, later transferring to Chapter 19, where she served as Hospital Chairperson for many years. She held life membership, both in Virginia and the Blue Hen State of New Jersey. She served in the Cast-Off Cardinals (past state commanders), as secretary-treasurer until 2005; was the State Commander for Virginia in 1961 and 1963 and served as a Page to the National Commander during the years of 1976 and 1997. She was awarded the George Seal Award as the most outstanding volunteer in the DAVA in 1988, including an all-expense-paid trip to the National Convention in Reno, Nevada.

Gladys was a member of Saint Mark’s Lutheran Church and assisted with chapel services at the Salem VA Medical Center on Sunday’s. She was also a member of the Roanoke Eastern Star.

In addition to her parents and husband, Gladys was preceded in death by her son, James Wayne Tayloe.

In lieu of flowers, donations may be made to either the Veterans Hospital Chapel Service or to the V.A. Volunteer Service at the Salem V.A. Medical Center.

A service to honor Gladys’s life will be conducted on Saturday, February 8, 2020, at 10 a.m., in the Abbey at Sherwood Memorial Park, with Chaplain Ronald Michaux, of the Salem V.A. Medical Center, officiating.

We encourage you to share your most beloved memories of Gladys here, so that the family and other loved ones can always see it. You can upload cherished photographs, or share your favorite stories, and can even comment on those shared by others.

Posted Feb 07, 2020 at 12:48pm
I enjoyed knowing Gladys and her family while working at Salem Terrace at Harrogate. She was an indomitable spirit, who brought enjoyment to many. Love and prayers, Gladys, to you and your family. Mardi Belfiore
Comment Share
Share via:
KB

Posted Feb 06, 2020 at 09:56am
I am so grateful and privileged to have known this sweet lady. I will miss your smile and funny stories. Rest In Peace, dear Gladys. 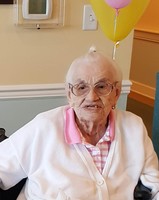