To share your memory on the wall of Elmer King, sign in using one of the following options:

John is remembered for being a man like no other. His sense of pride, respect, love, honesty, faith, and jolly humor set him apart fr... Read More
Elmer John King, “Big John,” 76, of Salem, Va., went to be with the Lord on Sunday, March 1, 2020.

John is remembered for being a man like no other. His sense of pride, respect, love, honesty, faith, and jolly humor set him apart from the rest of the world. He was a dedicated hardworking man who spent thirty-two years working as a painter for the Roanoke City School Board System. Prior to beginning his career with the school system, he worked for several years at the Brickyard in Salem Va. John was also the type of person who wasn’t afraid of saving money and would often do so by drifting his truck to work at the Brickyard and never starting it. Throughout his children’s lives he would do anything he could to take care of his family and make sure they never went without. One of the lessons he taught his children was the value of hard work. He would always take a bologna sandwich and a pack of nabs to work with him for lunch and was asked one day why he always ate bologna. He simply replied, “Bologna tastes like steak when you’re hungry.” His legacy will be carried on by his children, and he will be deeply missed by all those who knew him.

The family will receive friends from 2 to 4 p.m. and 6 to 8 p.m. on Thursday, March 5, 2020, at the John M. Oakey & Son Funeral Home in Salem. A funeral service will be held at 2 p.m. on Friday, March 6, 2020, in the funeral home’s chapel. John will be laid to rest at Sherwood Memorial Park immediately following the service. Rev. Andrew Draughn and Rev. Leonard Southern will be officiating.

The family would like to give a very special thank you to all the employees of Specialized Saw And Mower Inc., King’s Hauling And Excavating Inc., and Jo Maitland (Office Manager) for their friendship, love, kindness, and support over the years. Also, a special thank you goes out to all the volunteers and employees of the Roanoke County Fire and Rescue and Lewis-Gale Medical Center for all the support and kindness. It will never be forgotten, and it is sincerely appreciated. Online condolences can be made by visiting the funeral home’s website at www.johnmoakey.com.
Read Less

Receive notifications about information and event scheduling for Elmer

We encourage you to share your most beloved memories of Elmer here, so that the family and other loved ones can always see it. You can upload cherished photographs, or share your favorite stories, and can even comment on those shared by others. 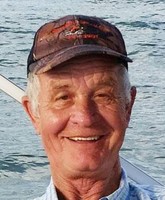