To share your memory on the wall of Douglas Shank, sign in using one of the following options:

Receive notifications about information and event scheduling for Douglas

We encourage you to share your most beloved memories of Douglas here, so that the family and other loved ones can always see it. You can upload cherished photographs, or share your favorite stories, and can even comment on those shared by others.

Posted Jun 26, 2020 at 08:37am
Douglas is my cousin and we grew up together as kids around 8 - 17. We lived next door to each other then and would call back and forth at each other using a sound like the old man up the streets car horn "HAAAA UUUGGGGGAAAA". So sad we lost touch as we grew up and what a lose to his family. I'm heart broken little cousin. Haa uugggaaa. See ya on the other side!
Comment Share
Share via:
VS

Posted May 20, 2020 at 03:03pm
Please accept my condolences, Leah,Briar, and Truman. Doug was a great friend. If any of you need anything just let me know. So Sorry

Posted May 17, 2020 at 05:20pm
My heart was sadden to read about the the loss of Doug and I wanted to give my warmest condolences to the family. He was so well loved and to lose someone like him can bring such sadness but the God of comfort tells us at 2 Kings 20:5 He feels our pain. At jw.org we can read in the Bible John 5:28,29 that not only does God care but he will also remove all the suffering he sees and gives assurance that you will have him in your life once again. May all the beautiful memories you have give you calm and peace until God’s promises come true. Again so very sorry for your heartache. 💐
Comment Share
Share via: 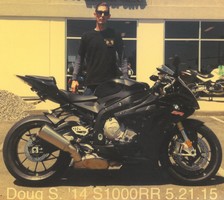