To share your memory on the wall of Douglas Kayton, sign in using one of the following options:

Doug was married to Dana Jeanette for sixty-five years before her passing in 2016. They both grew up in the Cradock area of Portsmouth, Va., where they were married in 1951. He joined the Navy shortly after and served during the Korean War. He was very proud of his service to the country. After the Navy, he worked for Norfolk Ship Building and Dry-dock in Norfolk, Va., for over 25 years before moving to Roanoke, Va., where he worked for many years and retired from the American Red Cross.

Doug was a very creative person, and a lifelong wood worker and artist. As an artist, he gave away many of his paintings just to see a smile on another person’s face. He and Jeanette painted hours and hours of murals on the walls of the Salem VA Medical Center in Salem, Va., just to bring smiles on the faces of his fellow service members. He also painted the stories of the Bible on the walls of his church, Salem Presbyterian. The Sunday School teachers still use Doug’s murals to teach young kids the stories of the Bible.

Doug will be missed and all he gave to those around him.

A private service of inurnment will be held by the family at the Salem Presbyterian Church Columbarium. Online condolences may be expressed at www.johnmoakey.com.
Read Less

We encourage you to share your most beloved memories of Douglas here, so that the family and other loved ones can always see it. You can upload cherished photographs, or share your favorite stories, and can even comment on those shared by others.

Posted Mar 30, 2020 at 08:54pm
To the family of Doug Kayton:
My sincerest condolences in the recent death of Doug, whose obituary I came across quite by accident while browsing the Roanoke Times tonight. I have been a nurse at the Salem VA Medical Center for 33 years and just retired a month ago. I have always greatly admired the murals Doug and Jeanette painted on the walls of Building 7. They are a charming array of pastoral scenes, with farm animals, trees, marine animals, all four seasons and especially the emblems of each of the branches of the military. Countless veterans, families and staff members have enjoyed that artwork over many years. They have left a wonderful legacy for all to experience.
Comment Share
Share via:
DB

Posted Mar 29, 2020 at 08:15pm
I am sorry to hear of Doug's passing. I will always remember him for being a neighbor and great friend.
I often think of Doug and Jeanette whenever I am at the beach House in Kill Devil Hills.

Posted Mar 29, 2020 at 07:42pm
We are saddened to hear about the passing of Doug. He will always be remembered as a willing and able neighbor and friend to our family the entire time he lived next door. The Kayton family was and will continue to be in our minds while we think about the good and not so good times we shared. Although time has passed certain memories will never be forgotten. Sam and Peggy Bridges ,David, Angie, and Danny. May your faith take your family on through life as it is to be.
Comment Share
Share via:
DB

Posted Mar 29, 2020 at 03:50pm
My sympathies and blessings to you all. Doug and Jeanette will always be remembered as the good people and good neighbors they were. We always missed them when they left Misty Point.
Comment Share
Share via:
BB 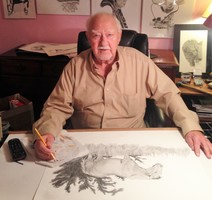