To share your memory on the wall of Dianne Byrne, sign in using one of the following options:

Dianne was born in Bradford, PA, on January 4, 1947, to the late Harry E Davis Jr. and the late Mary
Elizabeth (Beth) Davis. She graduated high school in Amarillo, TX, and completed her bachelor’s degree
in psychology at Washington University in St. Louis. After graduation, Dianne began working for Delta
Airlines as a flight attendant at which time she met her future husband, Patrick L. Byrne. They were
married in Chicago in 1972 and often flew standby for spontaneous weekends away. Their love of travel
continued throughout their 48 years of marriage, travelling extensively throughout the U.S., the
Caribbean and Europe.

Dianne enjoyed working at Salem Creek store in the 1990s and early 2000s and, after retiring, dedicated
her time to her favorite activities: travel, yardwork, wine, chocolate, bargain hunting and spending time
with family. Dianne had a warm smile and was full of life and fun; she proved to be a good sport, always
willing to pose for a funny picture or do anything to entertain her family.

Along with her husband, Pat, Dianne is survived by her two children, Kerry (Alan) Speicher of Ashburn,
VA, and Kevin Byrne (Dop Troutman) of Chicago, IL; her grandchildren Griffin and Quinn; her brothers
Mike (Ellie) Davis, Mark (Sandra) Davis and Matt Davis; and many nieces and nephews.

There will be a celebration of her life once family and friends can gather together safely.

The family would like to express their thanks to Joshua Morales, M.D., Susan Ames, LPN, Bret Adams,
M.D. and the full team at Blue Ridge Cancer Care for providing compassionate care throughout her
illness.
Read Less

Receive notifications about information and event scheduling for Dianne

We encourage you to share your most beloved memories of Dianne here, so that the family and other loved ones can always see it. You can upload cherished photographs, or share your favorite stories, and can even comment on those shared by others. 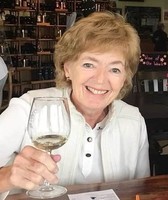