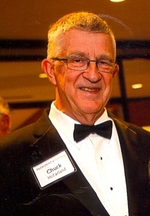 Born January 1942, son of George Leonard McFarland and Rosalind Kenway Lewis. Chuck attended elementary school in Scotia, NY, and moved to Salem, Virginia with his family when his father transferred to the new GE plant in 1956. From 9th through 12th grade, Chuck excelled and became a distinguished graduate and valedictorian of his Andrew Lewis High School class of 1960 and he was named a member of the Salem Alumni Hall of Fame. After high school, Chuck set out to pursue his love of Chemistry at Oberlin College, New Mexico State and Case Western Reserve University where he studied under Nobel Laureate George Olah and was mentioned in his autobiography. Thereafter he became a Research Chemist creating patents and remaining with the same company for over 30 years in Ohio and South Carolina. Because he wanted to hike the Appalachian Trail since his early days in New Hampshire at Lake Winnipesaukee, after he retired, he carefully planned and completed it from Georgia to Maine. He volunteered at Three Mile Island and was caretaker of the island for many years and received the AMC award for distinguished service in 2014 for his volunteer work. He became an avid Astronomer, speaking with Roanoke College classes which he loved, and enjoyed studying the weather. He was a life member of the American Chemist Society and Sigma XI, Scientific Research Honor Society.

Currently, Chuck was a very proud member of the Salem Choral Society and enjoyed singing for Reed Carter with other members and friends, served as Secretary for his Kings Crest Neighborhood, a Volunteer Salem Rescue Squad Support team member and ran each year in the “Salem Distance Run” started by his friends, Browder and Hester. He climbed many mountains, some to discover plane crash sites for loved ones, including Popocatepetl and Orizaba. He loved biking and took up distance routes on the Natchez Trace and Potomac Heritage Trails. Chuck absolutely adored their 13-year-old dachshund, “Bunny” as they loved to bask in the sun with coffee and a muffin from the Greenbrier, which was one of Chuck and Angela’s favorite places and the location where he proposed to her. His love of the Blue Ridge Parkway took them frequently to the Peaks of Otter, companions to the Appalachian Trail. He also loved attending Roanoke College Alumni and Honor Guard events with Angela. Chuck was an extremely kind, very soft spoken and brilliant man who loved nature and woodlands and life.

Chuck is survived by his beloved, Angela Lieb, whom he “found” almost 10 years ago at their 50th ALHS high school class reunion; his loved Grammie’s granddaughters, Madison L. Bourne and Callie M. Bourne; their parents, Tina and Gene Bourne; his son, Mike McFarland and Lisa, and their children, Ruth and Malcolm; his sister Rosalind Williams; cousins, Mary, Kathy, Laura, Bill, Warren and Ned; and many many many good friends and neighbors. Chuck will be terribly missed by all who loved him.

A graveside service at East Hill Cemetery will be private, however a memorial service in Chuck’s honor will be held at Salem Presbyterian Church with the Salem Choral Society and Reed Carter and will be announced at a later date. In lieu of flowers, contributions in Chuck’s honor may be made to the Salem Choral Society, Salem Presbyterian Church, or the Volunteer Salem Rescue Squad. An online guestbook is available for family and friends by visiting www.johnmoakey.com.