To share your memory on the wall of Rev. Allen Evans Smith, sign in using one of the following options:

Provide comfort for the family by sending flowers or planting a tree in memory of Rev. Allen Evans Smith

Provide comfort for the family by sending flowers or planting a tree in memory of Rev. Allen Evans Smith

Allen was born in Tallapoosa County, Alabama to William Walter and Docia E. Smith. After graduation from Benjamin Russell High School, he enlisted in the U. S. Air Force. Upon discharge in 1952, he enrolled at Washington Bible College and later at Piedmont Bible College in preparation for the ministry. He served churches in Alabama and in Virginia at Faith Baptist Church in Fincastle and Clearview Baptist Church in Roanoke, retiring from active ministry in 1998.

Private graveside services and interment were held for the family at Sherwood Memorial Park. An online guestbook is available for family and friends by visiting www.johnmoakey.com.
Read Less

We encourage you to share your most beloved memories of Rev. Allen Evans Smith here, so that the family and other loved ones can always see it. You can upload cherished photographs, or share your favorite stories, and can even comment on those shared by others. 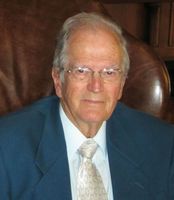