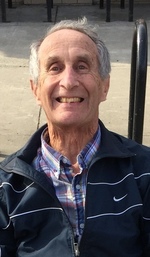 Baruch Dayan Ha Emet. Avraham ben Yisrael, Albert Morton “Al” Baril of Roanoke, VA, passed away peacefully on the morning of Saturday, October 5, 2019, at the age of 84.
Al was a veteran of two nations’ armies - the U.S. and Israel. After serving with the U.S. Army in the early 1950s, he returned to the University of Texas to complete his engineering degree.
While living in Israel in the early 1970s, he volunteered to serve with the Israeli Defense Force in the 1973 Yom Kippur War. Enlisting as 38-year-old Private, he served alongside other foreign-born Jews who wanted to help preserve the young state. Pretty old for a Private, yes, but his “old man strength” served him well. He continued to outwrestle his sons well into his 70s.
Al was a longtime soccer coach and referee. He truly loved teaching kids to be their best sportsmen. Al enjoyed many kinds of music, and delighted in singing, despite his questionable ability. Paul Simon’s “You Can Call Me Al” was one of his favorites, for obvious reasons.
A native of Dallas, Texas, “Al” moved to Roanoke in 1991. He was a lifelong mechanical engineer with 11 patents to his name.
Al is survived by his wife of 50 years, Beverly “Pat” Baril; his children, Lewis, Sandra, Ilan, and David; and six awesome grandchildren.
The levaya will be held at 1:00 p.m. on Monday, October 7, 2019, at the kever in the Beth Israel Cemetery, 2900 Orange Ave NE, Roanoke, VA 24012. Rabbi Jama Purser will officiate. Due to yontef, Mincha minyan will be Monday evening at 6:00 p.m. at Pheasant Ridge Nursing and Rehabilitatio Center, 4355 Pheasant Ridge Road SW, Roanoke, VA 24014. All are welcome to attend.
In lieu of flowers, charitable contributions may be made to the Veterans Affairs Medical Center in Salem, VA.
Shmira will be observed between the hours of 8:00 a.m. and 11:00 a.m. at John M. Oakey & Son Funeral Home, 305 Roanoke, Blvd. Salem, VA, for those who would like to read Tehillim.
Online condolences may be sent to the family at www.johnmoakey.com.