To share your memory on the wall of SSG. Timothy Woods, sign in using one of the following options:

Provide comfort for the family of SSG. Timothy Woods with a meaningful gesture of sympathy.

Print
SSG. Timothy Scott Woods II, 26, of Salem, crossed from this life to another on August 19, 2019 in Anchorage, Alaska.

Tim was born on March 23, 1993, to Timothy Scott Woods Sr. and Alicia Moran Woods. He was a 2011 Glenvar graduate who lettered in both football and wrestling. Tim was a phenomenal football player and was chosen to represent the Southwest Virginia football team in the state all-star game. After multiple offers to play collegiate football Tim carried his talents to the Citadel. Seeking a life of adventure, he left the Citadel and enlisted in the U.S. Army as an Infantryman. He served with both the 2nd Infantry Division at Joint Base Lewis McChord and the 4th Infantry Division at Fort Carson before attending Airborne School. After completing Airborne School, he was assigned to the 3rd Battalion, 509th Airborne Infantry, 4th Brigade, and 25th Infantry Division. Tim served a deployment to Afghanistan with this unit and was awarded the coveted Combat Infantryman’s Badge and an Army Commendation Medal with a “C” device. Tim loved adventure from motorcycles and fast cars to jumping out of planes. He loved his family, friends and his country deeply and was excited to come home on leave in September and see everyone.

Tim is predeceased in death by his grandfather James Albert Woods and a cousin Bryson Kane;

The family will receive friends on Tuesday, August 27, 2019, From 6 to 8:00 p.m. at John M, Oakey & Son Funeral Home & Crematory, 305 Roanoke Blvd. Salem, VA 24153. A funeral service will be held on Wednesday, August 28, 2019 at 11:00 a.m. in the John M. Oakey & Son Chapel. Tim will be laid to rest at Southwest Virginia Veterans Cemetery following the service. The family invites all to attend a reception following at the Pulaski National Guard.

The family would like to express their sincere gratitude to the staff at Providence Medical center in Anchorage, AK for their care and concern for Tim, as well as the EMT's and Alaska State Police. A special thanks to all of those at Joint Base Elmendorf- Richardson for your compassion and support of the family.
Read Less

We encourage you to share your most beloved memories of SSG. Timothy here, so that the family and other loved ones can always see it. You can upload cherished photographs, or share your favorite stories, and can even comment on those shared by others.

Melissa, Jauan and Bradyon, Brian and Raychelle Roughton and family., and others have sent flowers to the family of SSG. Timothy Scott Woods II.
Show you care by sending flowers

Posted Aug 28, 2019 at 04:30pm
Scotty, We are truly sorry to hear of the loss of your son. Please know that you and your family are in our thoughts and prayers.
Johnny and Lisa Buckner (AEP)
Comment Share
Share via:
MA

Posted Aug 27, 2019 at 01:37pm
Alicia,
Thinking of you and wishing you peace to bring comfort, courage to face the days ahead and loving memories to forever hold in your heart. We love you.

Posted Aug 27, 2019 at 10:54am
My momma passed away and I saw Timothy's book while at Oakey's. My heart and prayers are with your family and friends. Thank you to your son for his commitment to our country and his dedicated service. May God's love surround you and bring you peace and comfort in the coming days, weeks and months.
Continuous prayers,
Michele Dean
Comment Share
Share via:
BF

Brian and Raychelle Roughton and family.

Posted Aug 27, 2019 at 08:20am
Our thoughts and prayers are with you. Love, Brian and Raychelle Roughton and family. 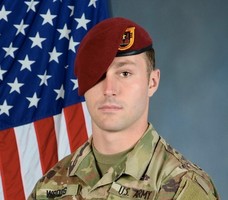