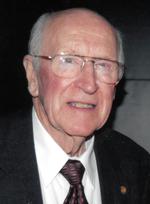 Courtney Elwood Jarvis, 91, of Salem, Va. passed away peacefully at his home on Tuesday, July 9, 2019. He was born on Wednesday, March 21, 1928, to the late Bernie and Lillie Rubel Jarvis in Paint Bank, Va. In addition to his parents, he is preceded in death by three sisters and one brother. He is survived by his wife of sixty-six years, Lois Wade Jarvis; one son, Tim Jarvis (Michelle); and one daughter, Cindy Francis (Jason); brother, Gordon Jarvis; nine granddaughters; numerous great-grandchildren, nieces, and nephews.
Elwood enlisted in the U.S. Navy during WWII on December 28, 1945, and was honorably discharged on November 13, 1947. His highest rank held was Navy Boilerman G 3rd Class. He also served six years in the Naval Reserve. After his honorable discharge, Elwood attended Andrew Lewis High School receiving his high school diploma. He attended Point University, formerly Atlanta Christian College in Atlanta, Ga. During this time he traveled with a singing quartet. Elwood was employed at Radford Arsenal during the early years of his life, he then was employed with Purex Corporation of Salem until transferring to Hazleton, Pa., where he retired and returned to Salem in the early ’90s. Elwood was a lifelong member of Salem Church of Christ, where he taught Sunday school, served as an Elder, sang in the adult choir, and sang in the praise ensemble. Elwood loved outdoor activities such as hunting, fishing, swimming, and snow skiing with family and friends. He held a pilot’s license and would spend Saturdays at the airport flying a plane. He loved his family time with his children and grandchildren. Elwood was a Master Mason of Pleasants Lodge, Roanoke, Va. He was a valued member of the A&A Scottish Rite of Freemasonry since 1958.
A celebration of his life will be conducted at 11 a.m. on Saturday, July 13, 2019, at the John M. Oakey & Son Funeral Home in Salem, Va., with Minister Eric Evans officiating along with Masonic rights. Burial will follow at Blue Ridge Memorial Gardens in Roanoke, Va. where military funeral honors will be rendered by the United States Navy. Family and friends will serve as pallbearers.
The family will receive friends at the funeral home on Friday, July 12, 2019, from 6-8 p.m.
Memorial contributions may be made to the Salem Church of Christ Mission’s Fund for Michael Flinchum (Thailand Missionary) at 401 West Main Street, Salem, Va. 24153.
The family deeply appreciates all the cards and visits during this time.
Online condolences may be sent to the family at www.johnmoakey.com.