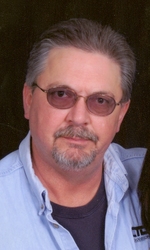 Bill was a 1976 graduate of Patrick Henry High School in Roanoke, VA. He subsequently attended Blue Ridge Community College where he further realized what would be a life-long devotion to being outside. Whether with hoe or tractor, he was most happy when “playing in the dirt.” After many years owning his own business, he went to work at Cardinal Valley Industrial Supply where he served as General Manager until his illness began.

In the off-seasons, Bill loved chasing grouse alongside a good bird dog (Rover deserves a mention here), or peering over a deer stand along the James River. In his later years he was most intent on serving Jesus Christ, striving to submit his own self-acknowledged strong will to that of his Lord.

He is preceded in death by his grandparents, Murph and Lera Mullins; and Glenn and Elizabeth Johnson. Also preceding him are his parents, William M. Mullins Jr., and Dorothy J. Mullins.

He is survived by his beloved wife of 41 years, Rebecca B. Mullins. Also surviving him is his only son, William M. Mullins IV, and his wife Jennifer D. Mullins. His first grandchild, Davis Murphy Mullins is expected in September. He also developed quite an affinity for his Mother In-Law, Josephine K. Bralley; she also survives him and carries on the landscaping tradition.

Flowers will be accepted or donations can be made to Grace Church, line itemed for missions. An online guestbook is available for family and friends by visiting www.johnmoakey.com.